Johnny has excelled in every venue. From the show ring to hunt testing to the wild bird fields, he has been outstanding in every way. In the kennel or the house, he is easy-going and a joy to have around. We cannot think of a more perfect example of what a shorthair should be.

Striking describes Shandy’s looks – she is jet black, with just a bit of hot white on her underside. Shandy is a little pistol She is a smaller female with lots of go, yet very calm in the house. She loves hunting sharptails, pheasants, ducks and geese each fall. She’s a natural backer and is always eager to “do it right.”

This is a repeat breeding of our 2014 litter.  These puppies have shown exceptional natural ability, strong desire in both field and water along with a strong work ethic and excellent cooperation.  Puppies should be ready to go to their new homes on or about April 15, 2016 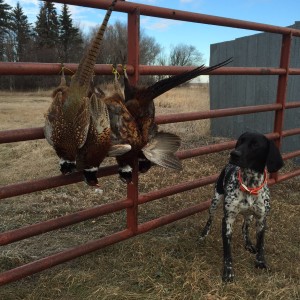 Butch, from our 2014 litter with a limit of North Dakota Pheasants 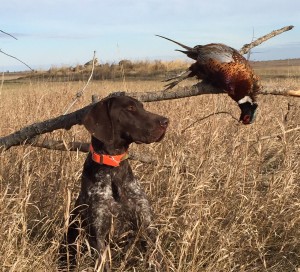 Rebel, from our 2013 litter with a North Dakota pheasant

From our 2007 Litter: This photo was taken in August of 2009. All three of these dogs from the first litter earned their Utility Prize I on the same day.

Rebel is our up and comer.  He was tested in NA and received a Prize 2, 108 points.  Rebel will be run in Utility in the summer of 2016.  He is out of our Shandy X Cody (Gunslinger’s Buffalo Bill Cody)  breeding.  Rebel has great conformation, a very strong water desire, runs smooth, and is super cooperative. 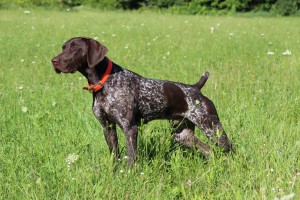 Spring Valley’s Wish I Was a Boy

Butchie is from our 2014 litter Shandy X Johnny.  We are so excited about this girl!  She is super cooperative, and just wants to learn.  In her first day of hunting sharptails, she had those wily birds figured out.  Butch earned a maximum score of 112 and a Prize I in her Natural Ability Test, and is testing in Utility this fall.

Fonzie has a new addition to the family — Amy & Jon also own a pup from Sassy’s last litter.